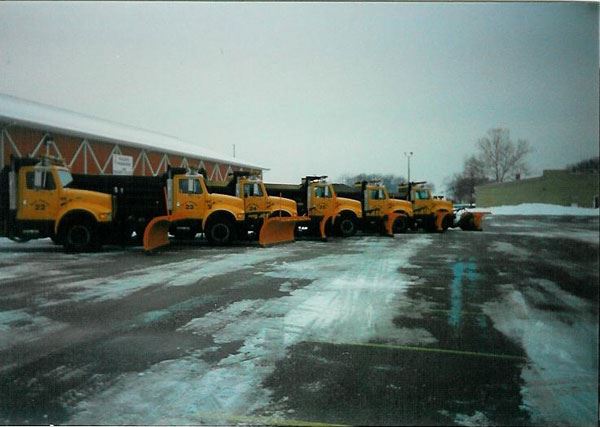 Please note that it is illegal to shovel or blow snow into the street!

The City does its best to plow in the most efficient manner, and snow from street plowing will be left at the end of your driveway.  This cannot be avoided without discontinuing to plow streets.  We regret the inconvenience, however, understand we are trying to clear the streets to allow travel.

The City has predetermined snow routes which are assigned by priority as described below. The level of intensity and the duration of the storm dictates the frequency of which the routes are plowed and treated. In the most severe storms, some of the lower priority routes will receive less attention until the weather eases up.

Primary routes include arterial streets and major hills. It is the City's intention to do everything possible to ensure that a system of top priority routes (primary snow routes) remains open and passable at all times. These routes are considered a priority because they provide a vital link for our police, fire and emergency rescue services and are used as common routes for commuting to work and school.

Secondary routes are typically residential roadways. They provide a network connection to all residential areas and complete the street network and grid system. These streets are given attention only when 2 inches or more of snow has fallen and once the primary snow routes have been addressed, and the snow has STOPPED falling.  We will not begin plowing secondary routes until these criteria have been met for the entire City.  Also note, that it is not policy to salt secondary routes.

Alleys will be cleared after Primary and Secondary routes are cleared.

The aforementioned policies are for guidelines with a certain degree of discretionary power. It is also understood that 100% of the streets system will not receive primary treatment for each storm occurrence. The City does not have a bare pavement policy.

Snowfall accumulations of up to one inch more or less, are generally handled (depending on weather conditions) by salting, sanding or combinations of salt, sand and calcium chloride.

City-wide parking bans will be implemented when snow conditions warrant. A parking ban shall automatically go into effect on any part of the City street on which there has been an accumulation of snow/ice of 2 inches. Parking bans are designed to keep streets clear for snow plows and emergency vehicles during heavy snows. It is unlawful to park or allow a vehicle to be parked during a Parking Ban.

Police officers are authorized to ticket and tow any vehicle that is parked on the street during a parking ban, if necessary. Police will try to locate owners of vehicles before they are towed. If your car is towed for that reason, you may contact the East Peoria Police Department at our non-emergency number, 309-698-4700. The dispatcher answering the telephone will be able to give you information on where your car is located and how you can retrieve it.

Give the Plows a Break!

Driving a snowplow is one of the toughest jobs! Drivers must maneuver a 27-foot truck with an 11-foot wide plow, weighing upwards of 50,000 pounds through City streets, while dealing with foggy windows, swirling snow, slippery roads, icy intersections and everyday traffic.

So please, "give them a break."