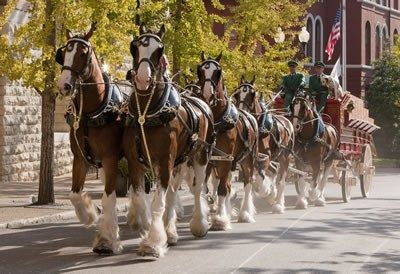 Those coming to the 35th annual Festival of Lights parade Saturday, November 16 will see not only the lighted Clydesdales float but the real horses as well. The Budweiser Clydesdales will make a special appearance, weather permitting, in the 2019 Parade of Lights.

The 35th parade is a great opportunity to see the Clydesdales, making an appearance for the first time in 15 years. They were previously in the parades of 2004, 2002, and 2000, when the festival’s Clydesdales lighted float made its debut.

Brewers Distributing of Peoria is generously sponsoring the Clydesdales' appearance.

About the Budweiser Clydesdales

The Budweiser Clydesdales make hundreds of appearances throughout the country and have been a part of Anheuser-Busch for more than 80 years. When traveling, 10 horses, the famous red, white and gold beer wagon and other equipment are transported in three 50-foot tractor-trailers. Cameras inside the trailers allow handlers to watch the horses, whose trailers have air-cushioned suspension and rubber flooring. Their handlers include groomers and a team which oversees the horses’ diet. Each hitch horse consumes as much as 20 to 25 quarts of whole grains, minerals and vitamins, 50 to 60 pounds of hay, and up to 30 gallons of water on a warm day.

The hitch drivers undergo a lengthy training process to ensure they have the expertise and physical strength to drive the combined 12 tons of wagon and horses. In addition, the 40 pounds of lines held by the driver plus the tension of the horses pulling creates a weight of more than 75 pounds.

A Dalmatian mascot also travels with each of the Clydesdale hitches, perched on top of the wagon seated next to the driver.

The turn-of-the-century beer wagons have been meticulously restored and are equipped with two braking systems, a hydraulic pedal device that slows the vehicle for turns and downhill descents, and a hand brake that locks the rear wheels when the wagon is at halt.

Additonal Chance to See the Clydesdales

The Parade of Lights is not the only opportunity to see the Clydesdales. The horses will make another public appearance in East Peoria, with the date, details and the location to be announced soon.